Pre-filled syringes have been widely used in the West. […]

When producing prefilled syringes, it is impossible to be bubble-free, and some air molecules will still remain in the syringe even under the lowest vacuum. If the best process conditions are used, the bubbles may be too small to be seen by the naked eye. The size of the remaining bubbles mainly depends on the vacuum in the syringe and the filling level during operation. The amount of dissolved gas is negligible. For example, the traditional vacuum stopper method is used: Fill a 1ml (long) syringe with 0.75ml of water-based product and press the stopper at a pressure of 100mbar, which will produce a diameter of 2mm bubble (based on 1000mbar pressure).

As the gas dissolves in the product, the volume of bubbles can be reduced by about 10%. Generally speaking, the pressure in the prefilled syringe must be significantly higher than the vapor pressure of the product. Low vacuum, low friction, high filling level, high gas solubility, and the use of push rods will reduce the residual gas space in the syringe. 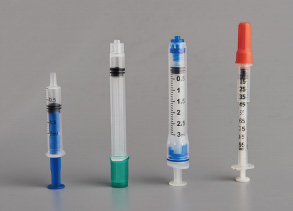 Silicone oil is mainly composed of polydimethylsiloxane (PDMS). In the 20th century, PDMS has been used in a variety of medical fields and has been approved by the United States Pharmacopoeia for pharmaceutical applications, including prefilled syringes. Silicone oil is used as a lubricant in the syringe barrel and in the rubber stopper, so that the syringe and the stopper can move smoothly with a low and consistent injection force.

The drug is in direct contact with the prefilled syringe needle, piston and injection needle. The active ingredients and functional excipients in the drug solution may also be absorbed by the packaging material, and the ingredients in the packaging material may also migrate into the drug solution, affecting the stability of the drug Sex and safety. The safety problem is mainly caused by the leaching of toxic antioxidants, adhesives and partial degradation products in the material; the stability problem is that the protein will aggregate, settle and inactivate when it comes into contact with silicone oil and metal tungsten.

During the shelf life, the drugs in the prefilled syringes will always be exposed to the environment with silicone oil, and the insoluble particles produced will enter the tissues or circulatory system with the injection, with a high degree of risk. The US, European, Japanese and Chinese Pharmacopoeias all have strict restrictions on insoluble particles in injections. But silicone oil is essential to ensure the performance of the piston. Therefore, it is necessary to conduct a more in-depth study on the particle problem caused by silicone oil.